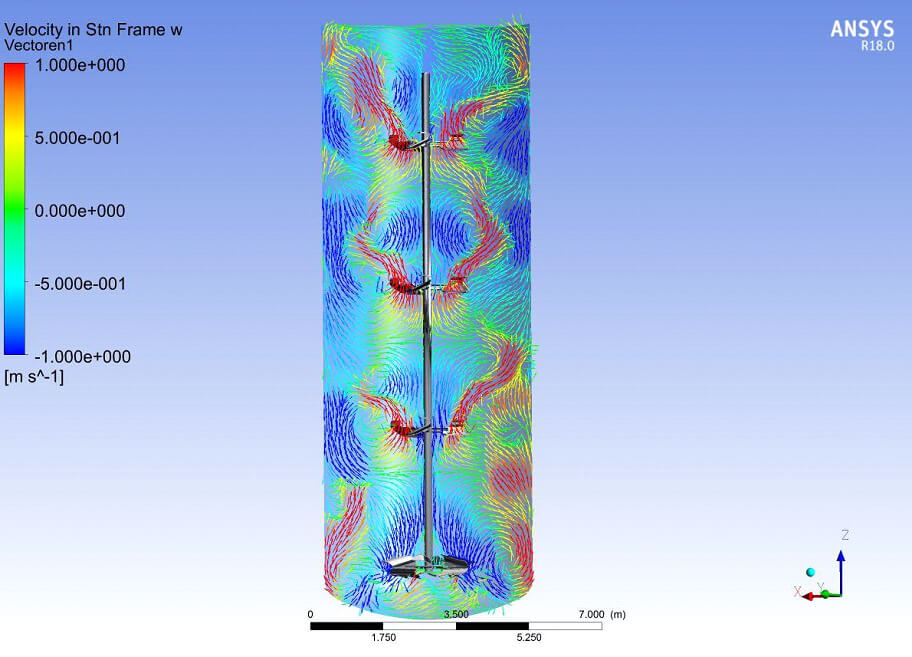 The most critical items in micro-organism fermentation at biotech plants are the fermenter units. Normally the process starts with a small shake flask, then a pre-seed fermenter approximately 100 liters in size, then seed fermenters with some 10 cubic meters of content and finally to main fermentation.

The agitation task of the fermenter is very complex. Gas fed into reactor needs to be dispersed efficiently in order to maximize oxygen mass transfer to the microorganisms for perfect metabolism. Fermentation produces carbon dioxide, which lowers the partial pressure of oxygen in the reaction zone and should be efficiently removed from the reactor. Feeding nutrients to the fermenting dispersion requires fast and comprehensive blending of the suspension.

Fermenters are very tall reactors, and normally low-viscous fermentation can be agitated with a series of conventional gassing turbines, such as multiple Rushton turbines, or a combination of these with axial pumping impellers.

Finally, when gas in no longer able to exit these intensive circulation zones, the conventional turbine is flooded and mass transfer rates drop dramatically.

In order to optimize our customer’s fermentation process, we developed a completely new range of gassing turbines that can handle large gassing capacities for high-viscous media and prevent hindered circulation between impellers with stagnant areas within the vessel.

The trick was the power distribution of the two-turbine arrangement to achieve maximum mass transfer at the bottom and perfect blending action at the top part of the vessel. Rushton turbines were replaced with a high-tech prime dispersing unit at the bottom of the vessel close to the air sparger for the maximum dispersion effect.

The upper part of the vessel was equipped with a completely new generation of axial flow turbines. HySol3 double-acting up-pumpers were applied for nutrient mass transfer to disperse bubbles. Continuous upward-directed pumping in the center of the reactor transports CO2 efficiently to the reactor gas space and blends the entire bath when circulating fluid back to the bottom region.

Compared to other axial impellers, the HySol3 combines high solidity special form, giving a sophisticated radial flow component. With this feature, efficient pumping is combined with the ability to maintain a fine gas dispersion. The impeller does not allow large gas bubbles through and has a much higher flooding point than any other axial impeller.

The optimal impeller configuration was developed through laboratory experiments and in parallel to CFD research at UTG´s fully equipped R&D center in Germany. The gassing performance of impeller configuration can be determined by measuring the absorbed power of the agitated fluid as a function of the gas feed rate.

The next picture shows that the perfect combination of our turbines in terms of power loss Pgas/P0 practically does not react at all to the gassing rate Q. Parameter colored are different Froude numbers. 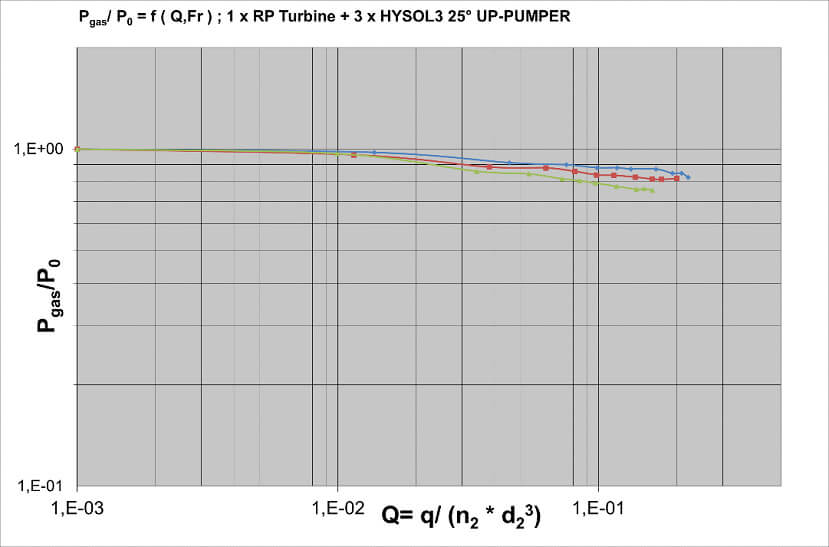 The continuity of the main circulation and the absence of stagnant regions was ensured by modeling the industrial-size reactor using CFD. Parameters for the non-Newtonian fluid rheology model was derived from lab-scale physical experiments.

Finally, mechanical calculations were conducted for tank and baffle loads, FEM and modal analyses of the vessel for structure approval, and a vibration check in order to give full support to the customer in their reactor design.

The first units were delivered to the overseas customer to fulfil the wide range of agitation duties: blending, suspension, gassing and finally heat transfer to the tank walls with double jacket and inner cooling elements.

An additional advantage of the solution is the lower radial forces and consequently lower bending moments, allowing a reduction in shaft sizes, sealing and gearbox sizes and making the investment cost of the new concept more competitive than traditional solutions.

According to the customer feedback we received, the newly developed units at maximum operation range are running with much higher OTR and shorter batch times, creating a higher yield for the plant.