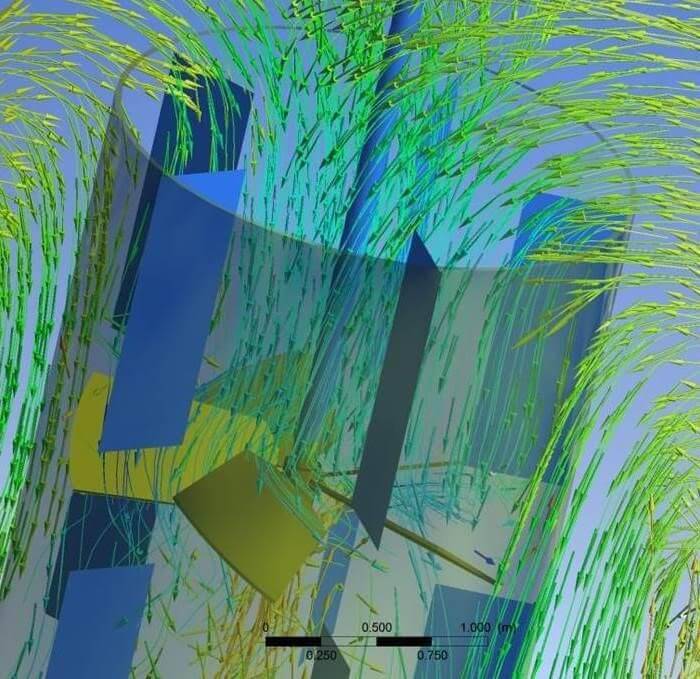 The challenge was to maintain the required circulation flow when the relative surface areas were decreasing in relation to the reactor volume.

UTG Mixing Group received a customer request for an upscaling procedure involving polymer production for polyester. Their main problem was that a linear scale-up in reactor technology was not applicable, as different criteria needed to be considered and each of them may have its own scale-up laws.

In mixing technology, the main mixing tasks are blend times, the suspension of solids and heat transfer. All these tasks needed to be fulfilled at the customer’s new planned production plant.

The average plant capacity was at that time between 600–900 tons/day. Expansions were partly running up to 1100 tons/day.

As with current esterification, highly viscous paste with more than 30,000 cP needed to be dragged in fast through a draft tube and blended into 285° hot liquid. This made scale-up complicated, as the cross area of a draft tube is
squared while volume is cubed. At the same time, the mass flow rate had to be maintained in order to guarantee the plant’s yield. This means that velocity has to be increased as the relative surface area decreases. Increasing the velocity by means of the rotation speed of the agitator will cause cavitation after a certain point, which can easily lead to equipment failures.

A similar scaling problem concerns heat transfer, as heat transfer surfaces are squared while volume is cubed. The agitator needs to have extremely high pumping capacity to maximize heat transfer from the inner coils to the liquid.

The target was to achieve maximum pumping capacity and thereby maximum flow with fast blending and high heat transfer performance.

The existing impeller systems operate in a draft tube surrounded by coils 26 rows high and 10 coils deep. The process itself runs at approximately 300°C. The agitator’s task is to drag in fresh material fast, push it through the outer coils and support reaction. Circumferential speed is the limiting factor due to cavity generation under low pressure and high temperature. 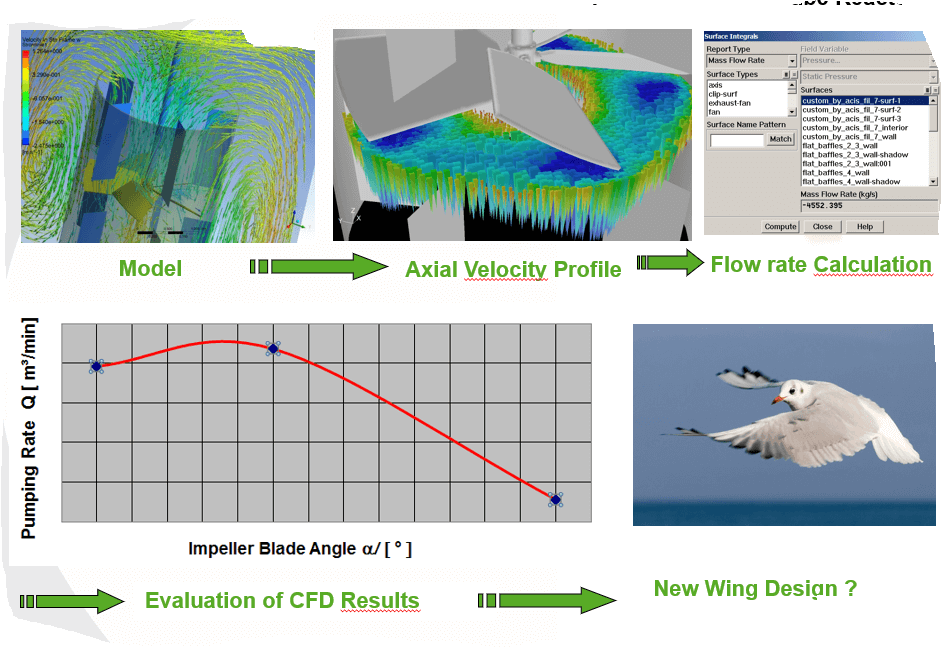 In order to increase the circulation rate but not circumferential speed, a new impeller had to be designed.

The previous fast-turning 3-bladed impeller design caused failures at high loads due to cavity formation, material removal at the impeller blades, unstable running and destroyed impeller wings and bottom bearings. This design was replaced by a new 5-bladed design with an optimized impeller wing angle.

The target was to achieve maximum pumping capacity and thereby maximum flow with low blending times and high heat transfer performance. This required an impeller that would have a certain power number guaranteeing low tip speeds and thereby low cavitation compared to competing designs.

The results were determined first through power measurements taken at the UTG Mixing Group’s laboratory, after which the design was taken to full production scale by means of computational flow dynamics (CFD).

The numerical simulation model of the reactor was validated by “real-life” power measurements taken at the laboratory. This CFD model enabled us to extrapolate the impeller’s geometry for the optimal relation between power intake and the primary pumping rate. The CFD model also enabled a detailed calculation of the heat transfer capacity of the heating coils and ensure that the new super large units would do their job.

The development process for the new impeller system is illustrated below. The model used to develop the new wing technology was also validated with real plan measurements.

The plant applying our new wing technology has been running without any problems now for more than 2 years. The reactor has reached its full yield without any cavitation problems, and the customer is extremely satisfied with
the results.

The quality delivered by UTG Mixing Group was confirmed by the customer: “This plant runs 24/7 all year round, which is why we ordered the solution from you and not locally – we can’t afford any downtime.”