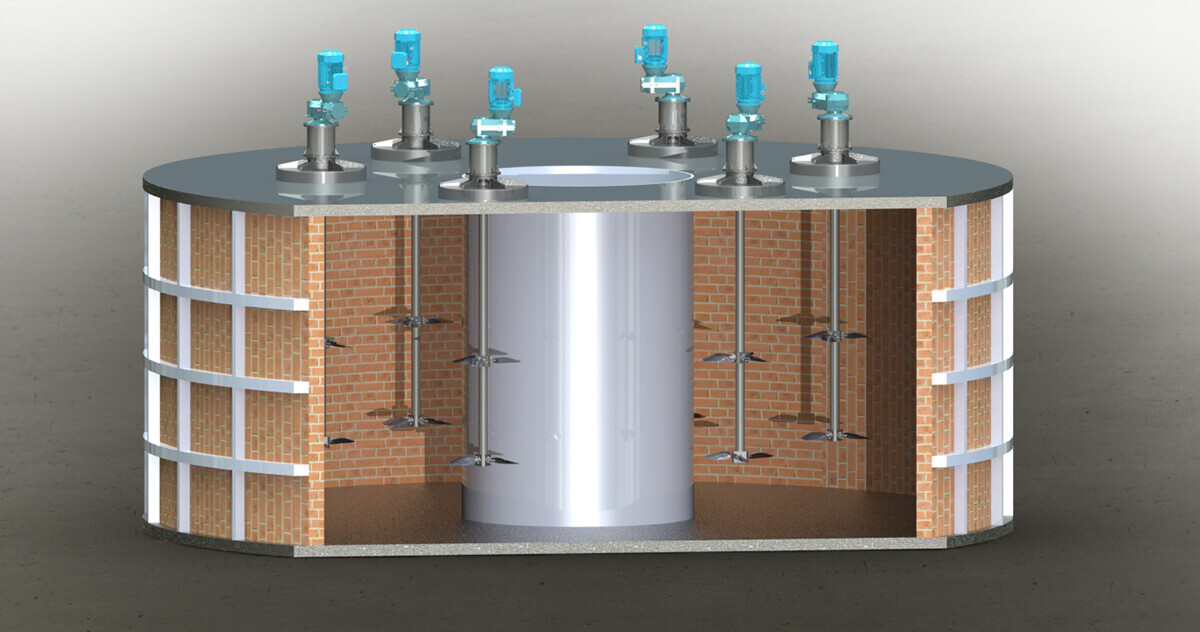 Our customer, one of the leading NPK fertilizer producer in the world, was starting a project to increase their production capacity by building a new reactor line.

Phosphate rock and nitric acid are fed into digestion reactors and sulfuric acid, phosphoric acid, ammonia and solid raw materials are fed into ammoniation reactors. These two main process steps set very demanding conditions for the mixing technology and the economic viability of the process.

In addition to increasing production capacity, another main target in this project was to lower production costs by increasing the utilization of ammonia fed into the ammoniation reactors.

The customer had run these reactors for over 20 years using standard Rushton turbines and had problems with increased chemical consumption in their off-gas scrubbing system to wash ammonia nitrogen out of the ventilation gases.

UTG focused on the very effective dispersion of ammonia in the lower section of the reactor by selecting highly efficient twin-level RP6 concave turbines for handling the main mixing task. An additional wide blade hydrofoil propeller was selected to handle the solid feed suspension in the upper part of the reactor and for feeding fresh material into the reaction zone.

The developed concept was studied and secured with the help of CFD simulation. Mechanically, the new agitators were designed for the highest availability level. A large number of special features was selected for preventative maintenance integrated in the agitator control system.

The agitators were successfully manufactured, delivered and installed on a very tight schedule. A UTG expert took part in the commissioning phase and assisted the customer in finding the optimal operating parameters. UTG also assisted the customer by providing recommendations for the basic geometry and internals of the reactor, such as material feeding points and baffling.

The agitators were taken into full-scale operation in a record time. Furthermore, the performance was better than what had been defined in the project requirements and targets. According to the feedback we received, the customer has been satisfied especially with UTG’s performance and is today using a similar concept at several production plants.